After we bought the cabinets, I knew we were going to have a cool looking hood.  I just didn’t know how it would look.  I knew once it was placed it would bring a finished look to everything.

So this is where we started from. 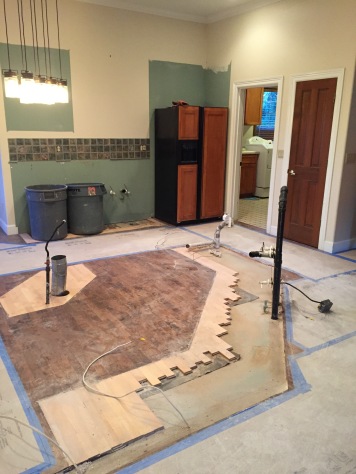 That’s quite a change in a little over 2 weeks!  Next, the tile comes off.

Tile is tough.  Not an easy task to remove a backsplash.  The tile was green and a mixture of other colors.  When we painted it the Divine White color (which isn’t really a white…more like a beige) it went ok with the backsplash, but not great.

Next in our makeover recipe we add new drywall and texture. 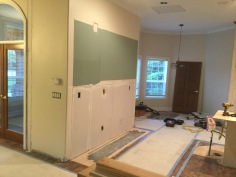 Stir in some paint and cabinets. 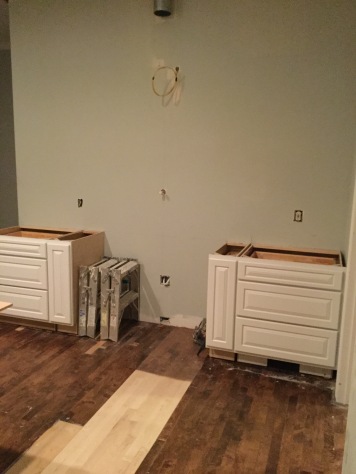 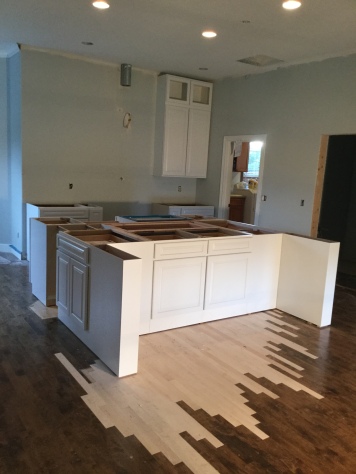 Add the tile and stove. 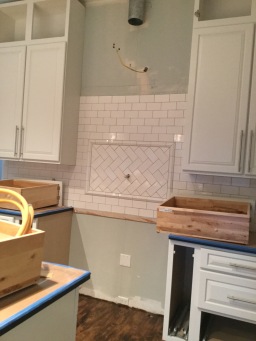 Almost there.  Can’t wait to get the cardboard off the counter to get the entire effect!

I really never thought that a wall could be dressed, but, it’s a thing!  So far the walls have been textured and painted.  It’s now time for molding.  We really wanted meaty molding because the room is so big.  We were looking for something like this Image from “Little green notebook” for the base trim.

After a few conversations with Ed, our General Contractor, we came up with this.

The new molding replaced a smaller 5″ molding we first installed when we moved in.  We were just going to add to it but decided to replace it with the larger  7-1/4 inch molding.

The last time we had molding installed, we opted for no quarter round.  I’m happy we decided to add it, it gives it a much more finished look.

After it gets installed, I’ll have to apply another coat of paint on the base;  I only put one coat on and it needs at least two.

We have moved many different times.   We’re talking double digits here.  And no, not because I’m running from the law!  New jobs or new homes drive our wanderlust.

There’s nothing like moving day.  It’s so exciting.  Promises of new adventures; new cities to figure out and truly live in.  But, moving is stressful.  You think with all those moves one would get used to it.  But you can become good and packing boxes or organizing a move, but, there are always elements that are out of your control when it comes to moving.

We decided to have our appliances moved in and boy am I glad we did.  The movers we chose were awesome (Big Al’s Moving).  Probably the best movers I’ve ever worked with (we’ve moved ourselves quite a few times, so we are included in the mix).  They were careful, gave suggestions and were all round good people.

The appliances we chose are heavy duty.  The stove weighs in at a hefty 750 lbs!  750 lbs! They moved that weight.  I couldn’t watch.  But they placed it in it’s spot and it looks like it’s always been there…without the tags of course.

This one has a griddle for all those hot cakes we’ll be making!

The refrigerator is a monster too and once again, I had to leave the room.  Couldn’t watch them move it in to place.

They must have thought I was crazy running in and out of the room.  That’s where the stress comes in.  Since the floors were finished, they warned me about finishing them BEFORE the appliances because, you know, something could happen and it gets scratched.  Plus, I didn’t want anyone to get hurt lifting this stuff.  I know, I know, they do this for a living and they know how to lift, but, still, anything can happen.

The big appliances came as well as the smaller items; microwave, dishwasher and compactor.  The hole for the microwave just seemed WAAAY too small and I didn’t think it would fit.  REORDER!

I kept walking by it when the microwave thinking, there’s no way.  NO WAY.  But, yes way.

Looks so good.  And to think we weren’t even going to have a microwave!  The plan was to put it in the island.  We rethought it and realized we didn’t want to have to bend down to microwave something all time.  We’d like to stand, thank you very much, when we get our radiated food.

The dishwasher we purchased is Asko.  Now a 2011 commercial shows people bringing their dishes over to wash them in the Asko Dishwasher.  I hope to he#$ no one brings there dishes over to clean.  Hey, I’d do it, but, it would be weird and uncomfortable.  Plus, I have a hard time getting my dishes into the dishwasher to clean, so why would I want to clean someone elses….getting all their food particles mixed up with ours…yuck…but I digress.

Did I mention we were redoing the floors?   Did I mention it was quite an under taking?  But, it will be worth it.  I guess when the floors are finished it’s just a few weeks ’til the finish line, right?

Just as a reminder, this is what we started with.  When we bought the home, there was carpet and light maple floors. 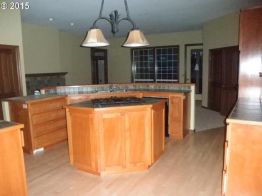 The first time we had Kips Hardwood in, they weaved in new maple and stained and finished coated with a Satin finish. 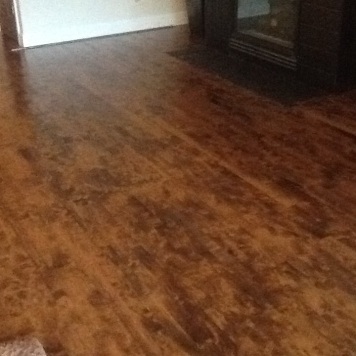 When we decided to remove the wall and add a new kitchen, the floors had to change too.  So once again, more hardwoods are applied to the floor and weaved in. 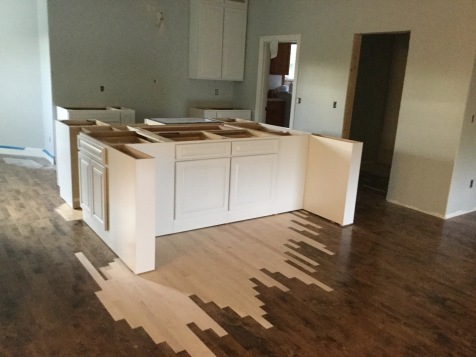 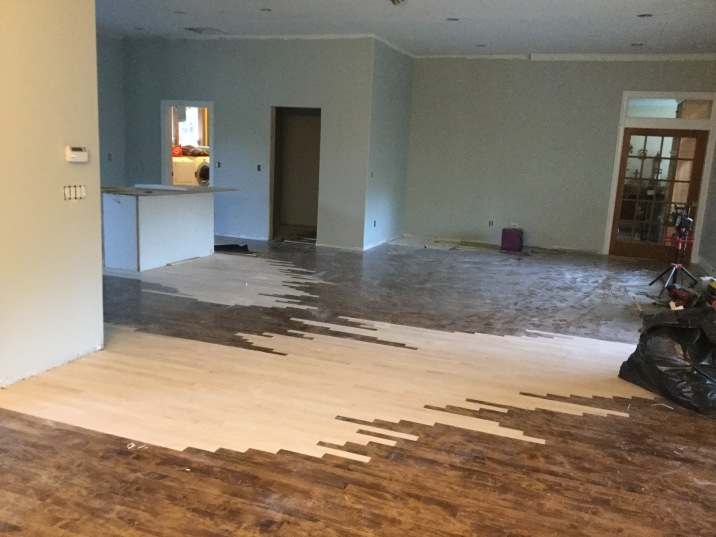 You know when you really aren’t sure about something, so there’s apprehension and anticipation grows.  I think that’s exactly what I was feeling about the counter tops.  Really not sure how they would look again the paint color or cabinet color.  Plus, with the discussion about where to put the seam, not sure about the granite we choose.

The day to install the counter tops is finally upon us and it wasn’t a simple under taking.  Our island is quite large and both pieces weren’t tiny.  But, within about 3 hours, all the granite was installed.

This is the first section.  Pretty nice so far.

This is the area where the stove and hood will be.

And last, but, not least, the island….still covered!  More to come!